We set off two weeks ago to an unknown destination.  We knew where we wanted to go (home), and we knew where we had tickets for (Oxenholme Lake District), but the weather had different ideas.  Yet another storm was rushing in from the Atlantic.  And this one was due to hit the path of our train between 6 and 8, precisely at the time we were to be crossing the moors round Shap.  The Virgin Pendolino remained in Glasgow, but our TransPennine Express decided to boldly go.

‘This train may not reach its destination,’ the driver announced chirpily.  We were already pulling out of Glasgow Central, and there was very little we could do about it.  ‘You travel entirely at your own risk.  We will keep you updated.’

We’d been up in Glasgow at the excellent Riverside Museum, which features transport of every kind from old Glasgow subway trains to a tall ship moored on the Clyde outside.  I’d wanted to do some research, as I’m working on a writing project set in Glasgow in 1905.  What better place to go to see a full reconstruction of an Edwardian street and sit in the old trams?  We loved it 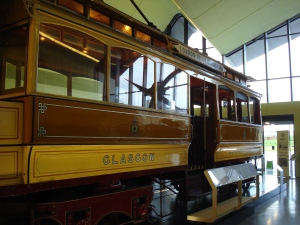 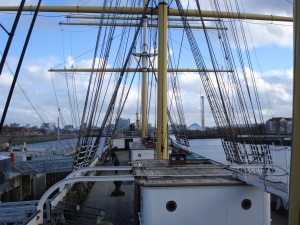 The TransPennine ‘Express’ gave up at Carlisle at 7 pm, where we were advised to ‘make our own arrangements’.   For us this involved giving the rather scruffy looking County Hotel a wide berth, finding the Ibis full and following the Ibis receptionist’s advice of seeking out ‘the bed and breakfasts further down the road’.  This road is Botchergate, and everyone to whom I’ve mentioned this has gone ‘oh, Botchergate!’ with a knowing expression.  The full array of seedy pubs and assorted shops ranging from Bridal Wear to ‘Thongs n Things’ was revealed the following morning. You wouldn’t really choose it for a holiday, and we are unlikely to stay there ever again, but we considered ourselves fortunate to secure the grandly named four-poster room in a very small bed and breakfast in a marginally more salubrious street just off Botchergate.  We headed home the following morning after doing justice to the full English.  The train didn’t stop at Oxenholme, though we did ask if they could make an exception.  We had to go to Lancaster and take another train back north to pick up our car at Oxenholme.

We have run two old cars for quite a number of years.  The exciting news is that life will change on 1st March, when we go to pick up a new vehicle.  Ladies, it is white with black trim.  Guys, it is a Skoda Octavia 1.4 TSI 140 SE 5dr with dual-zone climate control, rear parking sensors, Bluetooth, DAB radio and a USB input as standard and we have taken further opportunities to ‘spec it up’.  Its arrival will be timely as, on two occasions recently, our small old car’s engine has overheated dramatically, causing expense, worry and a lot of steam.  The big old car, which was rather creaky in the end, now has a new owner.  We were quite sad to see it go, as over the years it has taken us everywhere from Surrey in the south to the remote fringes of the Outer Hebrides in the north west.  My OH has consoled himself by purchasing a complete range of extremely specialist car care products.  I’m reflecting more on where our new transport of delight will take us.