I found this post, dated October 2016, under ‘Drafts’ on Harping On.  I don’t know why Christine didn’t post it at the time, but I see no reason why I should not bring it into the light of the internet.  Besides, the catalyst for Ships that Pass was my paternal grandmother’s diaries written over a few weeks in 1905.  Christine was keen to write in the ‘Show, not Tell’ manner, allowing, or, rather, requiring the reader to think behind the words.  Although many aspects of the story were invented by Christine, the lightly-veiled, underlying tragedy had a solid basis in fact.  Anyway, this is Christine’s Post . . .

I am currently putting the finishing touches to the German version of my story ‘Ships that Pass’, which will appear before the end of the year in an anthology published by Edition Narrenflug. Once again I’m very grateful to Karin Braun and Gabriele Haefs for inviting me to contribute and for the interesting work-shopping which we’ve done on the German version.  Thank you!

The English version of the story appears in my collection ‘Shifting Sands: Tales of Transience and Transformation.’

Some family diaries and notebooks found in an attic gave me the original prompt for ‘Ships that Pass’. Mary McNicol, the daughter of a Glasgow wine and spirits merchant, wrote a diary for three months in 1905. She had intended to write it for longer, but the prophesy of a friend that she would not stick to it turned out to be true. The little that we have is fascinating, however, giving an insight into leisured family life in Edwardian Glasgow at the height of the British Empire, a time when women were also on the cusp of liberation. 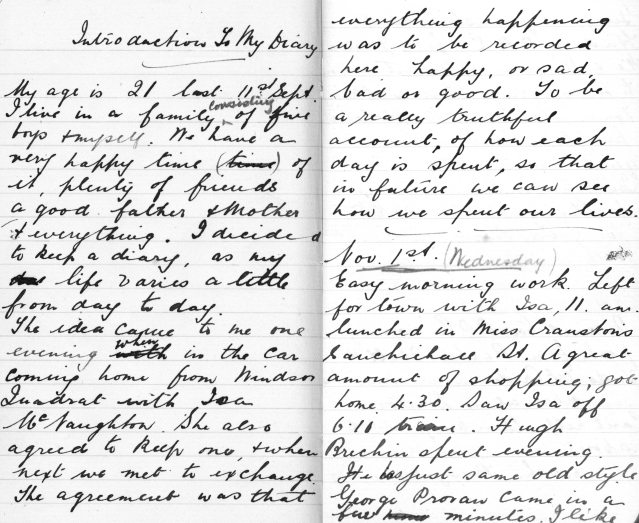 My source material gave me the names of many of the characters in the story I was to write, as well as detail about everyday life – Mary’s dreaded Sunday teaching at the Mission, meeting of friends at Miss Cranston’s Ladies’ Tea Rooms, Mary’s friend Isa and her gift of a lucky farthing.  And then there is Mama and her darning, the maid who leaves to get married, the regular delivery of postcards with messages from friends, the social evenings at home and Mary’s singing lessons.  However, the diaries did not give me a plot.  How was I to proceed?  The diaries gave an underlying hint of dissatisfaction on Mary’s part with a life of domesticity.  One notebook contained a holiday diary about a stay in Melrose where Mary met some Americans who ‘hustled’ and were keen to see all the sights. They sounded so modern that I decided to build them into my story, along with one or two facts that I knew about Mary’s subsequent life. The Americans bring the liberated views which Mary seeks in her desire to escape deep-seated Victorian values and Church traditions. It was here that I also found Mrs McNab of the Station Hotel, who suggests a motor car ride to Dryburgh Abbey. 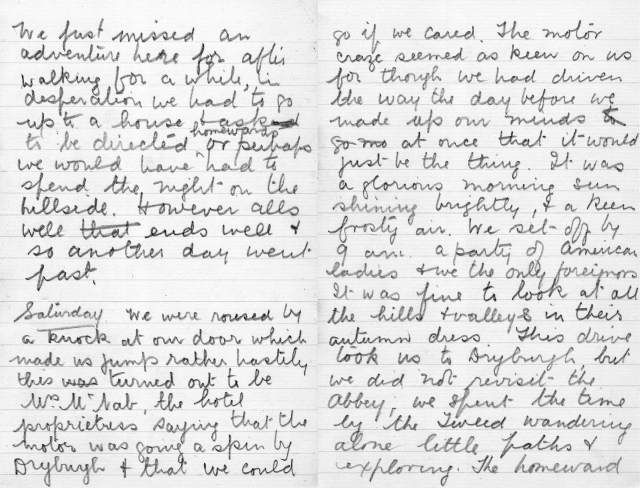 A key to the development of the plot was using a list of the wedding presents which Mary received.  They gave such an insight into the very domestic life of ladies of this era that I could not hesitate to use them!  But what didn’t appear in the diaries were events later in Mary’s life; events connected with her first husband, Andrew.  This aspect of the story was based on recollections of my mother-in-law, and a few photographs found in the same box as the diaries.  That background was transposed in time to give an extra dimension and poignancy to the tale.

As part of my research, I also visited Mary’s house in Craigpark, Dennistoun, a red sandstone end-terrace house, now divided into flats and bedsits.

You can still visit the Willow Tearooms in Sauchiehall Street (formerly Miss Cranston’s) and admire Charles Rennie Mackintosh’s De-Luxe Room with its distinctive high-back chairs, where I set some parts of my story.

I also enjoyed some research at the Glasgow museums, particularly the Riverside Museum with its trams (that Mary referred to as ‘Cars’ in her diaries) and street reconstruction.

‘Ships that Pass’ was originally a radio play written as part of my Open University course in Creative Writing. I had approached it in this way so that I could get a feel for the voices and sounds of the era and was interested in what I could achieve through speech alone.

When I rewrote it as a novella, I added, among other things, a framework story with Mary’s son which I hoped would give my story perspective and the sense of unearthing discoveries.

Those notebooks have come a long way, and I hope they enjoy their outing in Germany!

3 thoughts on “From Glasgow to Germany – Ships that Pass”