Life changed for a week.  Like the inhabitants of Cranford, we were all agog with gossip:

‘Have you heard they’re staying at the Sun Inn?’

‘They say filming starts on Monday…’

Our town, set between the Yorkshire Dales and the Lake District, was taken back to 1820s Cornwall for the filming of scenes for the BBC’s ‘Jamaica Inn’, to be presented as a three-part serial sometime next year.   The buildings are apparently the right colour for Launceston.  Each day brought intriguing new developments.  Firstly, the square was filled with piles of artefacts in shades of dull brown – market stalls, barrels of rum, brooms, braziers, baskets, carts and coffins.

Two days later they were spreading rich dark earth over the lines for the parking bays, building new frontages in wood for the shops and cafés on the south side of the square and erecting a neat little wooden shed to hide the ‘Pay and Display’ machine. The estate agent became the Fleece Inn, and the local hotel became the Customs and Excise Office. 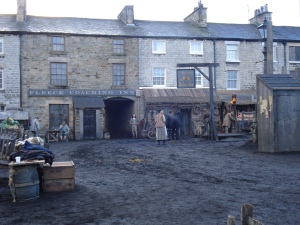 Like many in the town, I couldn’t keep away.  On Monday they brought on horses and carriages, and there was a glimpse of Jessica Brown Findlay, reincarnated after her death as Lady Sybil in ‘Downton Abbey’, passing in the Bodmin Fly.

Then on came the actors, smoke machines and rain machines, more horses and some geese.  Fifty local extras stood around in the cold waiting for their moment – as did the main actors, of course.  The horses were equally patient. 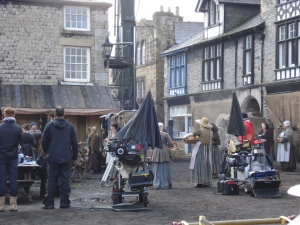 The crowd watched and chatted and wondered.

‘All this for fifteen minutes of film, I’ve heard.’

‘Amazing.  A once in a lifetime event for us, living on a film set.’

‘Wonderful earth, that.  Could do with some for my garden.’

More community spirit was engendered than on any other day of the year.  In a similar way, I posted a picture of the set on my Facebook page and found it was one of the top posts of the year for ‘likes’.  I began to wonder about this.  Is it because it takes us out of our reality, as any piece of fiction does?  Is it because of the draw of ‘celebrity’?  Do we want to be able to travel back in time?  Do we want to be ‘in a story’?  Do we just enjoy those moments of incongruity, such as the innkeeper on his smartphone between takes?  Whatever it is for each individual, it led me to reflect on the great power of stories in our lives.   Which reminds me I really ought to be getting on with my first short story assignment for my OU course.  But perhaps I’ll go down and check on the filming first. 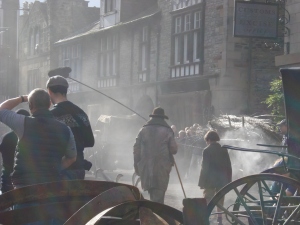 2 thoughts on “Changing the backdrop”