Temperatures are soaring and weather presenters are getting over-excited about the orange weather map again, although it has now got to the point when they do concede that ‘some of you may find this a little uncomfortable’. I belong in this category, but I do savour early mornings in the garden and evening walks by the river, surely the best times of day to be out and about in the heat of summer.

I prefer a bracing climate. That’s why we head for the Hebrides every June. 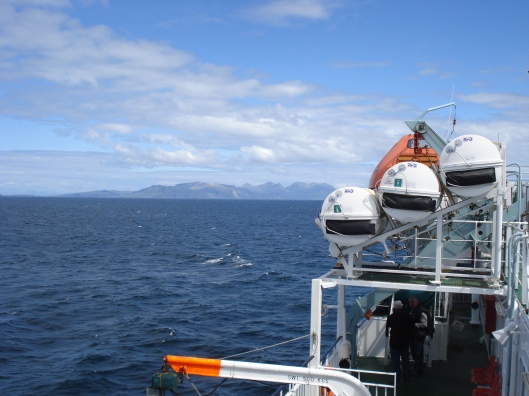 I’m never happier than when boarding a CalMac Ferry – the friendly personnel who guide you into the tightest corners of the car deck, the swirly patterned carpets, the coffee bar with the tray bakes, the slightly rusting steps up to the observation decks, the plastic seats faded by sun and salt spray, the wind in my hair, the mixed smells of sea, engine oil and fish and chips. We sail out of Oban to the music of car alarms going off on the deck below us, nose out past the island of Kerrera and head up the Sound of Mull, pointing out Duart Castle and looking for Ben More (it’s nearly always in cloud) and the coloured houses of Tobermory. That’s where the sheltered waters end, near Ardnamurchan Point. This time we’re lucky, and it’s calm as we head west. The silhouettes of mountains on the horizon gradually become more defined, and five hours after leaving Oban we sail into Castlebay, Barra – the main community on the island, with a castle, in a bay.

People usually know more about France and Spain than the Western Isles.  Sometimes they’re not sure where we’re heading.

‘Did you say Paris?’

And so out comes the atlas and we point to this year’s destination at the southern end of the archipelago that forms the Outer Hebrides. From the Butt of Lewis lighthouse in the north to here it’s 130 miles. There are a few islands further south, starting with Vatersay, which is linked to Barra by a causeway. The roads end here. Then there are a few more islands, all ending in ‘ay’ – Sandray, Pabbay, Mingulay and Berneray. The ‘ay’ means island.

Barra is the perfect island with all the elements of the Western Isles in just 35 square miles – white sandy beaches, turquoise seas, moorland, birdsong, wild flowers, mountains and lots of weather. 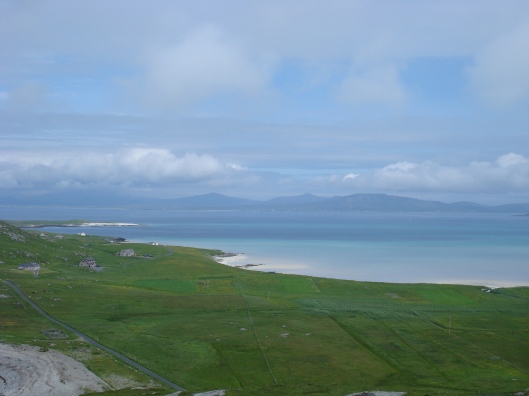 You don’t have to drive far to enjoy all these things, and even a small hill yields amazing views. You can go plane-spotting too; it’s the only airport in the world where scheduled flights land on the beach, and this is worth seeing. Baggage handling is a tractor with a trailer, which delivers the cases neatly to a bus shelter at the side of the car park. 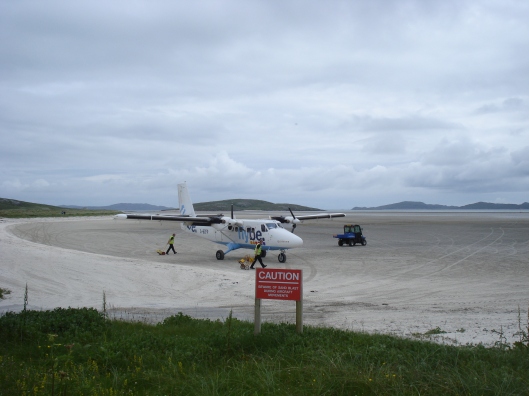 We like to take a self-catering cottage on these holidays – plenty space for all the walking gear, particularly if it gets wet, and the opportunity to browse the local Co-op to be tempted by haggises, black puddings and Meal Deals. Usually your cottage owner will tell you what day the fish van comes. In Castlebay, it’s Thursday. We wonder every year why fresh fish is actually such a rarity when we’re surrounded by the ocean. 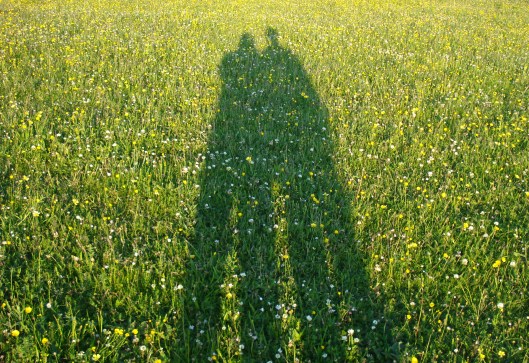 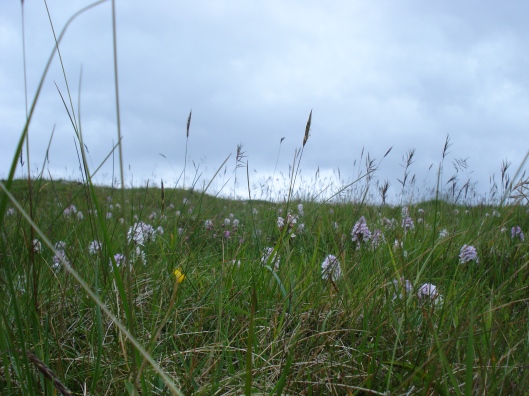 At the end of June, there are flowers in profusion on the machair – more varieties of orchid than we can count and the scent of clover in the air. The nights hardly get dark and you can sit on the western beaches and watch the sun dip down beneath the horizon shedding golden shafts across the water. 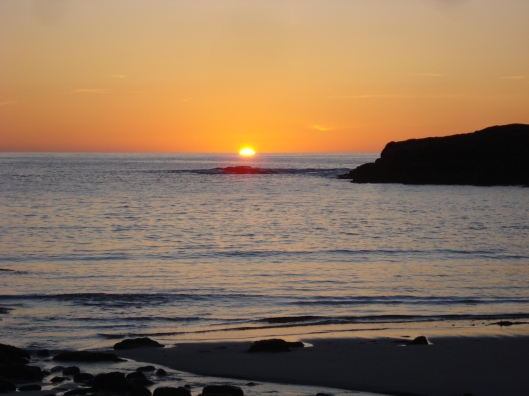 If you want to go south to the last islands in the chain, Donald Macleod of http://www.barrafishingcharters.com/ will take you to the deserted island of Mingulay in his boat the Boy James. Expect to share the boat with anglers who will be dropped off at other islands on the way, and expect some movement on the waves. If the tides and conditions are right, Donald will take you round the western cliffs of Mingulay and through a natural sea arch. It’s all in a day’s work to him. ‘There’s a couple of guillemots,’ he says in an understated way as our excited companions point there cameras at thousands of birds wheeling under the beetling cliffs. ‘Oh, and a couple of seals.’ 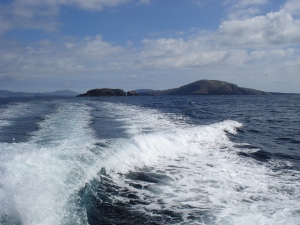 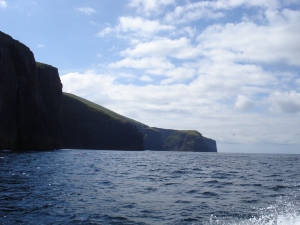 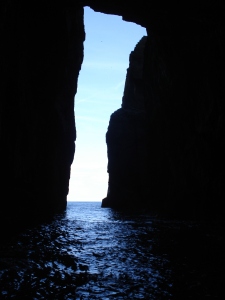 You land on the east side of Mingulay, a perfect desert island beach. Donald takes us on a rubber dinghy to the landing place, where we have to scramble up steep rocks to a grassy slope. ‘You might be seeing puffins up there,’ he nods. The puffin burrows have little flags outside with numbers (presumably they’re being monitored). We sit for a while and are rewarded by the residents of Number 17 coming in with some fish. No once a week delivery for them. 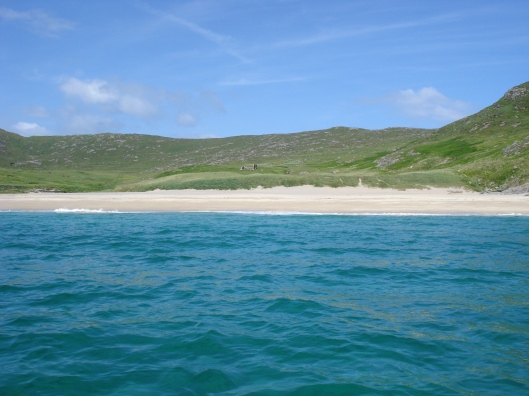 We walk past the ruins of the village and up a pathless slope to the top of the cliffs, hard work in the hot sun. Here we eat lunch, keeping a respectful distance from the dive-bombing skuas. It feels remote; we have breathing space.

Donald serves tea and scones on the way back. He also has a folder of information on Mingulay if you can cope with reading this in a bouncing boat while holding a cup of tea. I prefer just to stare at the horizon and take it all in.

There’s one other question we get asked about the Western Isles. What about the midges? This year, there were none. Either the place is charmed or we were just lucky. 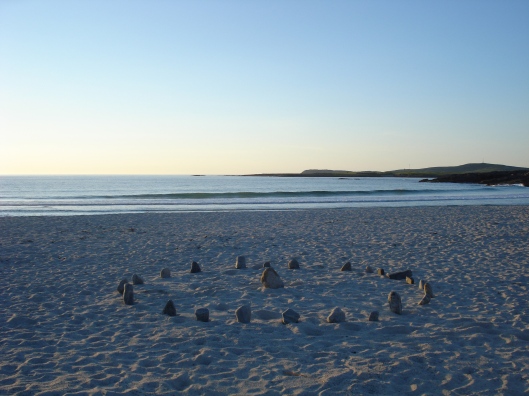