Today’s prompt comes to us from Megan Pattie, who points us to the work of the Irish poet Ciaran Carson, who increasingly writes using very long lines. Carson has stated that his lines are (partly) based on the seventeen syllables of the haiku, and that he strives to achieve the clarity of the haiku in each line. So today, Megan and I collectively challenge you to write a poem with very long lines. You can aim for seventeen syllables, but that’s just a rough guide. If you’re having trouble buying into the concept of long lines, maybe this essay on Whitman’s infamously leggy verse will convince you of their merits.

My poems usually have short lines, so this was a challenge.  I reworked a draft of a poem I had written about the German city of Dresden, which I visited five years ago.  I was inspired by this photograph of the reconstructed Frauenkirche and the statue of Martin Luther. 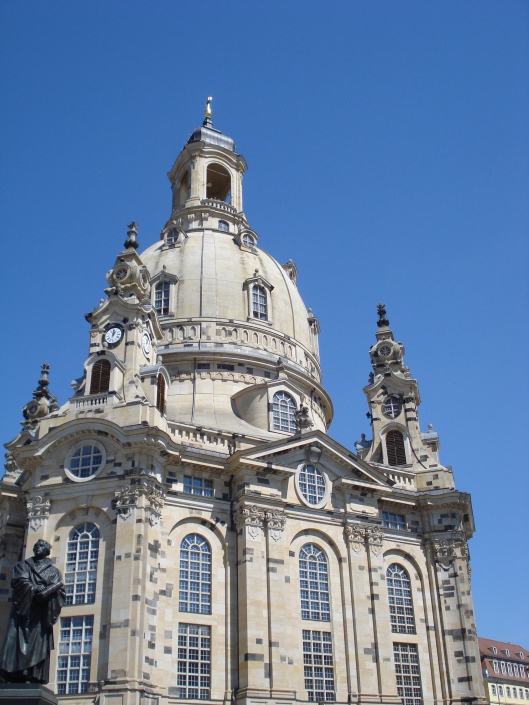 What the guide said

We lift eyes to the dome’s bulk against blue skies where our planes,
pregnant with bombs, once droned in black night. The dome dominates,
too large for the church beneath, dwarfing the statue of Martin Luther.

He spoke the language of the people so that all could read the word of God
in their own tongue, the guide said. Behind us cameras click; a thousand voices
speak different languages; spoons clatter on silver metal tables of street cafes.

The church stands firm, symbol of peace and reconciliation, organ music
singing through open doors. And in this film set of buildings, this city
sanitised, reconstructed, reshaped, we try to comprehend the invisible past.